The Bureau of Land Management (BLM) is seeking public comments on a request by the NuLegacy Gold Corporation to expand exploration/drilling activities in the Rocky Hills Herd Management Area (HMA) in Nevada. The Proposed Action will increase disturbance to a crucial habitat area that is heavily used by wild horses. It’s also in close proximity to the horses’ only reliable water source and smack in the middle of the corridor used by the horses to access it. The BLM acknowledges that the cumulative impacts of the project could restrict the wild horses’ free-roaming behaviors as well as have a negative impact on their use of the habitat and their genetic health. Increased activity could possibly also result in orphaned or abandoned foals due to human presence in critical areas during foaling season.

Across the West, America’s remaining wild horse and burro populations are under pressure from wide-scale livestock grazing and the increasing industrialization of our public lands. Please take this opportunity to urge the BLM to reject this request for expansion of gold exploration activities in the Rocky Hills HMA. If the project does proceed, your comments can help to ensure that necessary protections for wild horses are strengthened significantly beyond what is currently proposed. Please take action below.

The following post is from the Youths’ Equine Alliance.

A new low has been reached when the BLM (Bureau of Land Management) refuses to help find homes for horses – something that is mandatory of their job.

On October 17th, we were able to attend the one-day only public tour of the Broken Arrow Holding Facility where 2,744 wild horses and burros are held captive. On that day, we took as many photos as we could and tried to capture the tag numbers of each horse photographed.

Later, we used social networking to begin finding homes for the horses we saw – successfully. Our efforts were even featured on Wild Horse Education’s website where you can find the names of the 4 women who took the lead on the adoption efforts (one of them was our director.)

Please, click on the short video below to see and hear what Denise documented on the day of the tour. You simply will not believe it.

Now, here is the truly awful part: after finding so many adopters, the facility manger, John Neill, refused to provide a simple list of the horses and tag #s that were adopted through our efforts. We had to file a FOIA (Freedom of Information Act) application and are still awaiting a response.

Even worse, a few days later, Mr. Neill told 2 of the women who were helping to post pictures that they needed to stop posting pictures because it was causing too much work for his guys.

The bottom line: These 4 women found somewhere between 20-30 adopters in 2 weeks! Last year the entire BLM only adopted out 282 horses and burros.

I haven’t forgotten the horses and burros at Broken Arrow and I refuse to. Please help us to fight this by helping us do what we do best: raising awareness! Thank you so much for all of your support and encouragement!

The Mustang Gals were able to go see the petroglyphs and also the wild horses in Cold Creek because of supporters like you! It is the good times like that that keep us going through the hard times like this.

Meredith on “All About Horses” 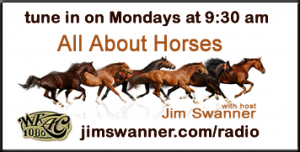 Earlier this week, Meredith Hodges made a special guest appearance on Jim Swanner’s All About Horses radio show on WKAC, to discuss mules, donkeys, and horses. Click here to listen to the archived show, which airs every Monday at 9:30am on WKAC or streaming online.

Help Needed to Save Mustangs from Slaughter Auction

We have breaking news to share with you. We’re getting closer to rescuing all 31 Virginia Range horses who are awaiting their fate at the Carson City Prison. (See photo to the right of one of several bands at the prison.) As our coalition works tirelessly to find homes for the last 10 horses, we need your help to raise the money needed to pay the horses’ bail and help with transport costs.

If we don’t rescue these horses they will be sent to the slaughter auction.

Last week we told you about Bond (the stallion pictured below), his family and the other Virginia Range mustangs ne

eding help — they have found their forever homes! Now we are focused on placing the remaining 10 horses (three, small family bands) … some out-of-state rescue groups have offered to take some of the horses but they need us to purchase and deliver them.

In order to save these beautiful mustangs, we must raise the funds necessary to bail them out of the prison and transport them to their forever homes. Will you help?

These wild horse families were captured and removed from their homes on the range last month by the Nevada Department of Agriculture. Under the auspices of our parent organization, Return to Freedom, we have a cooperative agreement that allows us to purchase captured Virginia Range mustangs directly from the NDA to prevent them from being shipped to the slaughter auction.

We must urgently raise at least $15,000 to cover the purchase price for these horses and help with transportation costs. Whatever you can contribute today will get us closer to our goal of sparing these beloved and dignified mustangs the nightmare of the livestock auction, where they would be heartlessly sold by the pound.

During the Christmas season, please think of us. It would be the greatest gift if we could have a reunion for the rally here in Las Vegas and the movie premier too. If anyone deserves to be on the red carpet, Meghan Dixon in Texas and Amber Neuhauser in Kentucky who are also in the film deserve to be with us. The rally is on December 6th and the movie is on December 8th.

Thank you for making our dreams of saving horses
and horses’ dreams of having loving homes come true.

Last week, we told you about Bond, the proud stallion pictured at right, who was captured with his family from their home on the Virginia Range by the Nevada Department of Agriculture (NDA). The fate of hundreds of Virginia Range horses, just like Bond and his family, hang in the balance. They could fall victim to the same inhumane state practice of capturing and removing horses instead of humanely managing them on the range.

As you know, AWHPC has been working to secure a public/private partnership agreement to humanely manage the Virginia Range wild horses and prevent more horses from being captured. In the last week, nearly 10,000 of you have faxed Nevada Governor Sandoval urging him to prioritize our proposal.

But help is urgently needed to stop more horses from being captured. Your donation is needed for:

….On-the-range projects, such as fencing construction and/or repair that will keep horses safely out of roadways and residential developments. Numerous projects can be implemented NOW with cooperation from private property owners ahead of the cooperative agreement with the state.

…..Care, training and placement of 23 Virginia Range horses rescued after their capture by the NDA last year. These horses — including Blackjack (left) and his lovely family — are in temporary quarters awaiting their forever homes.

….Our vital work with the Governor’s office and local organizations to secure the cooperative agreement. Once in place, our coalition can begin to implement a fertility control program and other range management measures (including diversionary feeding) — which are currently prohibited — to keep horses out of harm’s way and prevent their capture.

We know you care about these horses … this is a real a opportunity to keep wild horses wild.

Please give whatever you can to keep the Virginia Range horses free and wild. 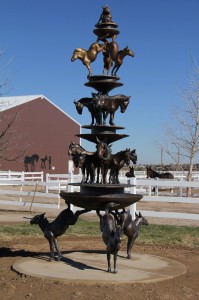 After two years, we finally finished our latest longears sculpture, a fountain called “Dreaming of Friends” by Robin Laws of Cheyenne, Wyoming, and I couldn’t wait to share this with all of you! This piece was done to accommodate the twenty LTR longears (plus one miniature horse) that were not champions and did not have their own commissioned piece. We try not to play favorites here!

Tours are currently closed for the winter season, but make sure to book your visit to see the statue in person in the new year through our website.

Small figurines of the Spuds and Augie topper may be available for public purchase—please contact us for pricing, availability, and more details.