Upwards of 100 wild donkeys from Hawaii’s Big Island are scheduled to fly into LAX on September 17th, 2011 at approximately 12:30am. These donkeys were captured as part of a population control project organized by the Humane Society of the United States. As there are few available homes for the donkeys in Hawaii, they are being brought to the mainland to the Peaceful Valley Donkey Rescue (PVDR) , our nation’s largest donkey rescue with facilities all across the country.

Peaceful Valley Donkey Rescue was established as a non-profit organization in the year 2000 in Acton, CA by founders Mark and Amy Meyers. The Meyers, along with their staff, have since rescued thousands of donkeys from abuse, neglect, abandonment in 27 states as well as captured hundreds of wild burros throughout the Western States that were under threat of destruction.

The Meyers will fly to Kona Airport just prior to September 16th departure to take charge of the loading of the donkeys. Pacific Airlift will be transporting the donkeys aboard a specially modified cargo plane that was designed to transport cattle and horses. The plane will be met in Los Angeles by Peaceful Valley’s transport teams and taken to PVDR’s 140 acre California Facility in the Tehachapi Mountains near Bakersfield, CA.

Donkeys were taken to the Hawaiian Islands in the early 1800’s to help in the farming of sugar and coffee. As the processes became more mechanized, the donkeys were released onto lava flows where they thrived and multiplied. Residential and commercial developments have come into direct conflict with the donkeys.

The Hawaiian word for donkey is: KEKAKE.

These donkeys will be made available for adoption at a special Adoption Fair held during PVDR’s Open House: DONKEY TOWN 2011 on October 29, 2011. Information regarding the open house, adoption policy, where to donate, and other ways you can help can be found on the Hawaiian Donkey Rescue project page or the PVDR homepage.

Donkey roping – a barbaric use of donkeys for practicing roping skills – has been reported in many states and detailed in an article about a roping event in Mineral Wells, Texas in 2009.  Meredith sent this response to the editor of the newspaper.

I have been promoting and training mules and donkeys for more than 36 years, and I can tell you without reservation that this IS animal abuse. These donkeys you are using for your sport in this capacity will be ruined for any normal recreational purpose in the future by anyone else and will result in their demise. I opted publicly on the side of using the donkey to train for roping when there were complaints lodged against the TV show on RFD-TV because I noted the donkey was only used to train a beginner and was not actually roped. The loop was thrown under his back legs and the they allowed the donkey to walk through it, but the beginner could see it would have been a catch. Actual roping of donkeys is appalling and abusive, especially in an event of this magnitude! There are precautions taken when roping cattle that make it more humane (such as horn wraps), but there is no way to protect the donkeys, who should NOT even be involved in this sport because of their inherent nature to be loving and affectionate toward humans. Isn’t it clear to you from their behavior? It is clear to me that you are lacking good judgment, and I will do everything in my power to see that those who continue to abuse donkeys in this way are prosecuted for animal abuse to the fullest extent of the law!

If you hear of donkey roping activities in your area, let us know and let’s stop this abusive practice NOW.

On December 5, 2010 we welcomed Rock and Roll, two draft mules to Lucky Three Ranch.  Rock is 17 years old, 18 hands and Roll is 16 years old and 17 1/2 hands.  Both of our new residents have various physical issues and have begun an intensive rehabilitation program including massage, chiropractics, proper nutrition exercise. Check back and follow the progress of these two beautiful gentle giants! 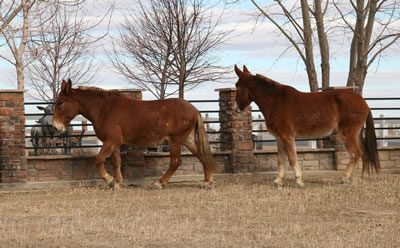 Fall in Love with Jasper!

Jasper A Precious Valentine is available on DVD!

When Jasper and his human family head up to Bald Mountain for a picnic to celebrate Valentine’s Day, Jasper gets a crash course in love.  Jasper’s latest adventure features music by Grammy-winning group Riders In The Sky and is appropriate for all ages.  Click here to find out more and don’t forget all the other neat books and videos in Jasper’s store!